Home Italy The 10 best things to do in Rome

The 10 best things to do in Rome

Visiting Rome: What are the things you should see?

The Italian capital has a rich culture and history but what are the best things to do in Rome? If you are planning to visit the city for the first time, this question probably already came to your mind.

Vacation should be fun but with a great flexibility in doing what you want to do, it can be hard to actually decide among the great amount of options. In order to use your time on site on things you really want to do, you should think about your priorities in advance. For this, we hope that the following guide to the best things to do in Rome will help you!

The best places to visit when in Rome 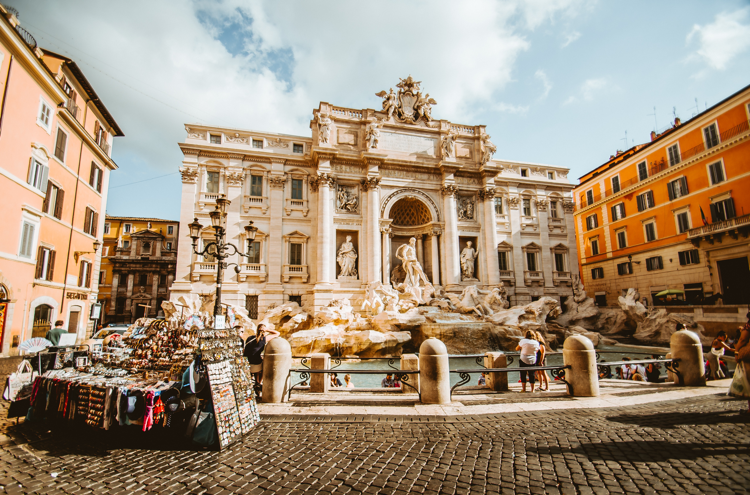 The Trevi fountain is considered to be one of the most famous ones in the world and the largest fountain in Rome with its 26 meter height and 50 meter width. It was designed by the Italian architect Nicola Salvi and constructed over a period from 1732 to 1762. Visually, the fountain is more or less a complement to the Palazzo Poli, which is located in a mountainous area behind the fountain and can be seen on most snapshots. The origin of its name is not entirely clear as Trevi either refers to the three springs that feed it or to the intersection of three streets that cross at the fountain. 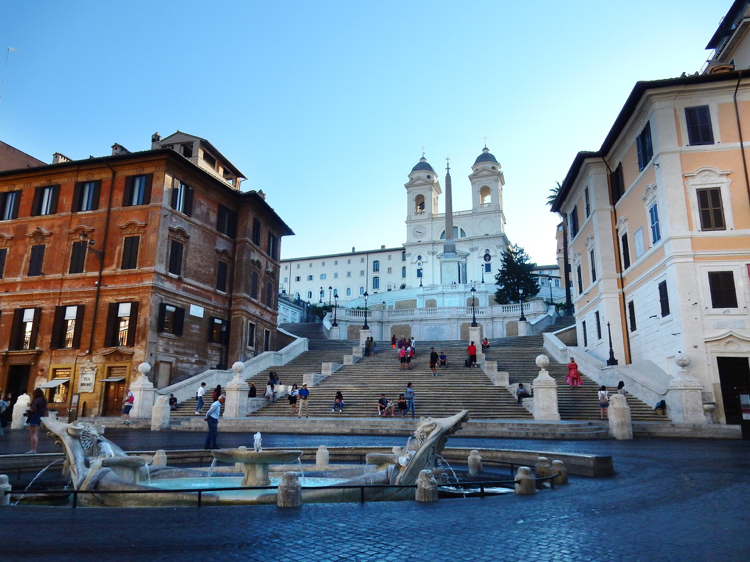 The Spanish Steps go down from the Church of Santa Trinità dei Monti to Piazza di Spagna. The square takes its name from the Spanish embassy located here in the 18th century. Today the staircase with a total of 136 steps is one of the most famous open staircases in the world and a popular meeting place for locals and tourists.

A famous photo scene is also the fountain at the foot of the stairs, in the Piazza di Spagna. Legend has it that during a flood of the Tiber on the Christmas days of 1598, a barge was carried here and stopped when the flood receded. This legend inspired the famous Italian sculptor Bernini to build the Fontana della Barcaccia between 1628 and 1629 in the form of a barge. 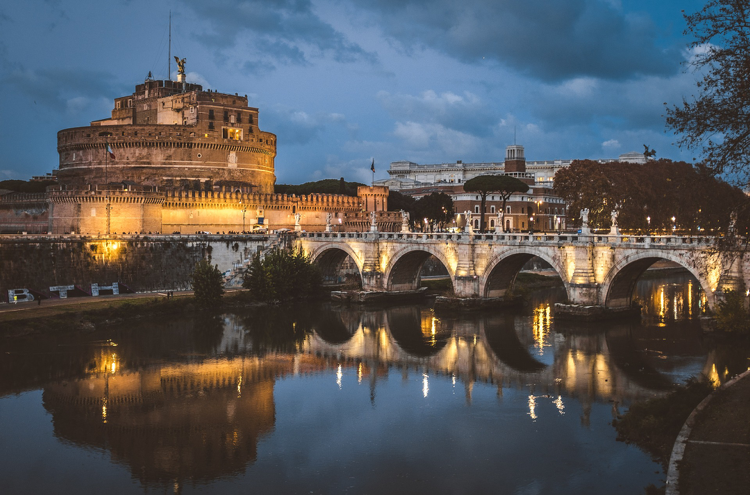 The mausoleum of Emperor Hadrian was completed in 139. Not only Hadrian, but also some later emperors, among them Mark Aurel and Septimius Severus, found their last resting place here. From the 10th century onwards, the Angel Castle served the Popes as a shelter in the event of imminent danger, and later also as a prison. After the building fell into the hands of the Italian army in 1870 and no longer belonged to the Vatican, it was transformed into a museum at the beginning of the 20th century. To this day, various exhibits bear witness to the history of Rome. The Angel Castle received its name at the end of the 6th century: Pope Gregory I had asked God to free the city from the plague. Shortly afterwards the Archangel Michael appeared above the castle and promised the fulfilment of this wish. To this day, a bronze statue of the Archangel stands on the roof of the castle.

The Colosseum is of course by far the most famous sight in Rome. The amphitheatre is a building of superlatives, after all it is the largest amphitheatre ever built in the world and belongs to the seven wonders of the modern world.

The Colosseum was built between 72 and 80 A.D. and once served as the venue for the cruel and usually extremely brutal events held to amuse the citizens of Rome; admission was always free. At that time, the Colosseum was a masterpiece of technology that is hard to imagine even today. For instance, after removing the wooden planks, the arena could be flooded. Thus, a dry place became in no time a huge swimming pool or a lake on which Emperor Titus and other rulers had Naumachia (sea battles) performed. Today, the ruin of the Colosseum is one of the most popular photo spots of the world and one of the best things to do in Rome during a short holiday. 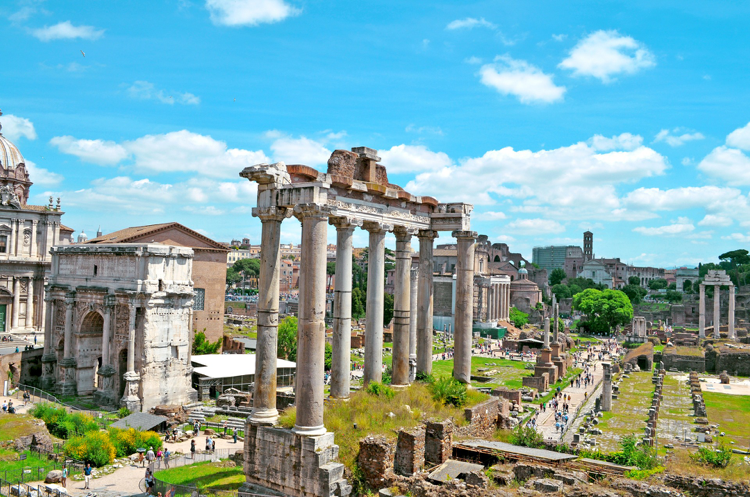 The Forum Romanum was a marketplace and centre of political power, and is therefore considered the heart of ancient Rome. Today, at first glance, it looks like a disorderly collection of ruins. But if you look at the historical drawings of the numerous buildings, temples, basilicas and triumphal arches that once stood on this surface, you can get a good idea of the city life of that time.

Besides the religious temples (e.g. the temples of Saturn, Janus or Castor and Pollux), politically significant buildings such as the Senate Curia Iulia or the state prison Carcer Tullianus were found here. Of the three triumphal arches built by various emperors to celebrate their victories, two remain today: The Titus Arch (built by Emperor Titus after the conquest of Jerusalem) and the Septimius-Severus Arch, which commemorates his victory over the Parthians. 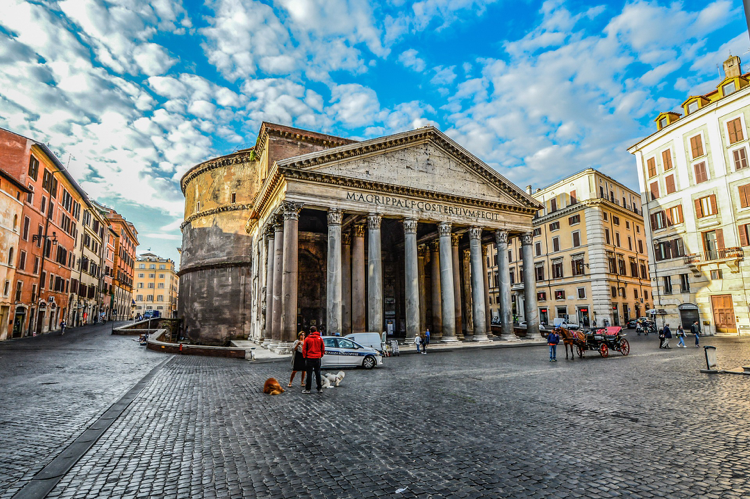 The Pantheon is one of the highlights of a sightseeing tour through Rome. The building, called La Rotonda by the Romans because of its shape, is the successor of a temple built by Consul Agrippa in honour of his friend Emperor Augustus at the same place. Already the predecessor building was designed as a round building, the dimensions corresponded approximately to the building standing up to the present day.

Quite early the Pantheon was transformed into a church in the course of the centuries. We probably owe it to this fact that it is one of the best preserved buildings of Roman antiquity to this day. 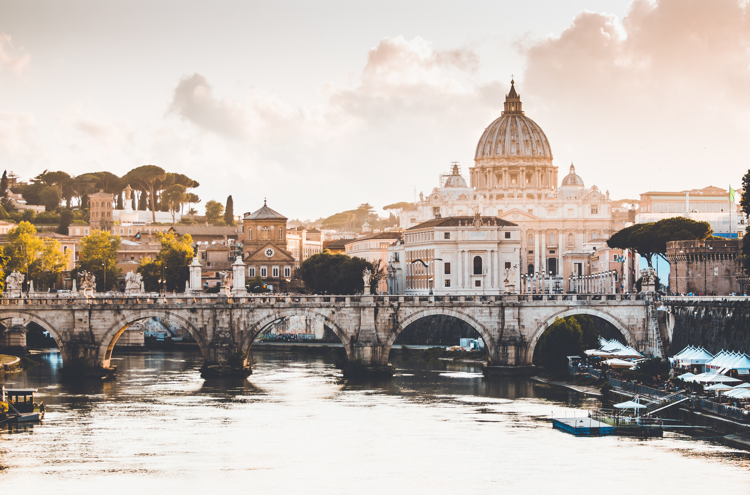 If you are planning a short break in the Eternal City, the Vatican is one of the best things to do. The smallest state on earth, only 44 hectares in size, is an enclave within the Roman city area and the last state with Latin as its official language. 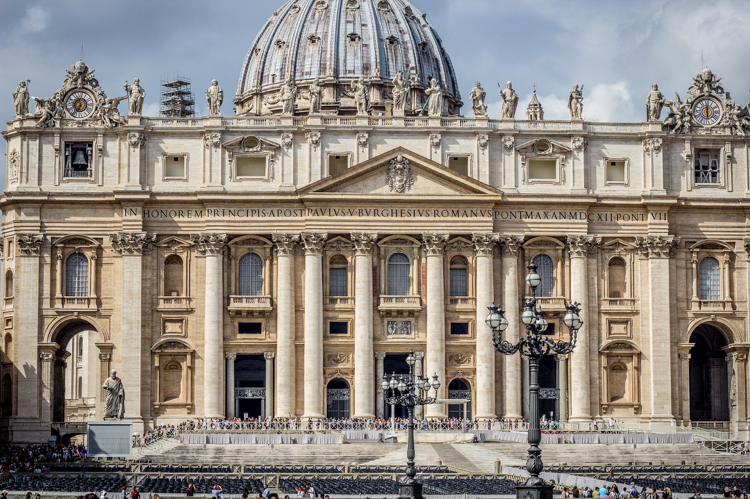 The “Basilica Sancti Petri in Vaticano”, the official name of St. Peter’s Cathedral, is one of the highlights and absolute “must see” of the Vatican enclave in Rome. It is also one of the most important churches in the world and is closely associated with the Papacy itself because of the tomb of the Apostle Peter, over which the Cathedral was built.

St. Peter’s is the centre of the Vatican and one of the seven pilgrim churches. As in all churches in Rome, entrance to St Peter’s Basilica is free. This is not the only reason why a visit to the Basilica is a must for every visitor to the city but there is also much to discover on the 15,160 m² of the building. 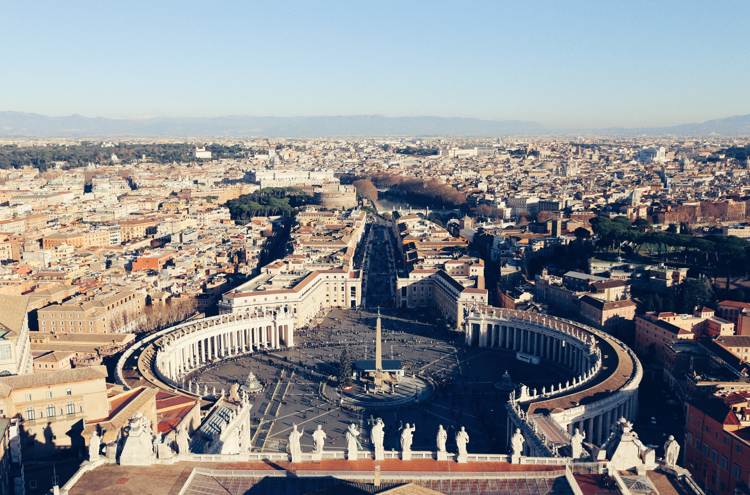 Piazza San Pietro, known as St. Peter’s Square, is the central square of the Vatican and the Catholic Church. Right above there is the pope’s apartment, from where he prays Angelus when he is in Rome. At Easter, at Christmas and immediately after the first public appearance as newly elected Pope, countless people gather in St. Peter’s Square to listen to the Pope speaking to the faithful from the balcony of St. Peter’s Basilica with the Urbi et Orbi blessings.

The square, lined with 88 pillars and 140 holy statues, is open to every visitor – at any time of the day or night. Next to St. Peter’s Basilica, the obelisk in the middle of the square and the two fountains will immediately catch your eye. While the obelisk was designed solely by Bernini, the fountains also bear the signature of Madernos. 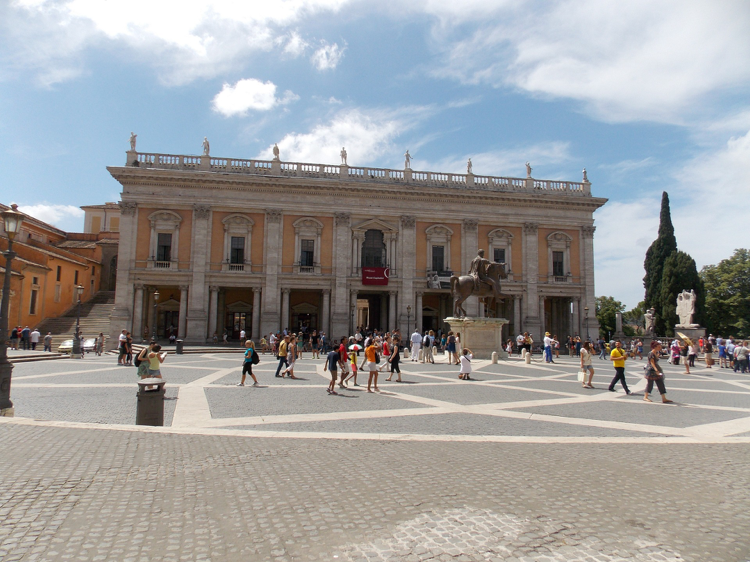 The Capitol Hill, in Italian “Monte Capitolini”, is the smallest of the seven hills of Rome, but has always had a special cultural and political significance. Locally, the hill is simply called Capitol, which includes the Capitol Square as well as the Capitolium, the southern hilltop with the temple of Giove Capitolino.

The Capitol Square can be reached via a large open staircase. Nearby, on the site of the ancient temple of Juno, is Santa Maria in Aracoeli, an important church whose history dates back to the 6th century. Walking straight from Capitol Square you will reach the monument to Victor Emanuell II, a gigantic building erected in the early 20th century in honour of the first King of Italy.

What to expect from you trip to Rome

Rome has for a long time been a very important center for Western civilization and its historic elements can still be seen everywhere today. You will definitely have a good time there if you plan your trip ahead and follow these recommendations of some of the best things to do in Rome. However, also explore the small streets and the local life as this is key to getting a better feeling for the city.