The 10 best things to do in San Francisco

The Bay Area is probably one of the major destinations that tourists from all over the world want to see when they make a trip through the United States, with San Francisco being the first thing people usually connect to the region. The city has been the set for various Hollywood movies so there are a few places that you might already have seen. But what are the best things to do in San Francisco? This probably the first question you will ask yourself right after purchasing a plane ticket for your next trip to the French capital.

When going to a unique city like San Francisco, you surely want to get most out of your stay even though most travellers only stay there for a short period. In order to do so, you should plan ahead to avoid losing direction and to make sure that you really see the best things in the city – so check our guide to all the best things to do in San Francisco!

The best places to visit when in San Francisco 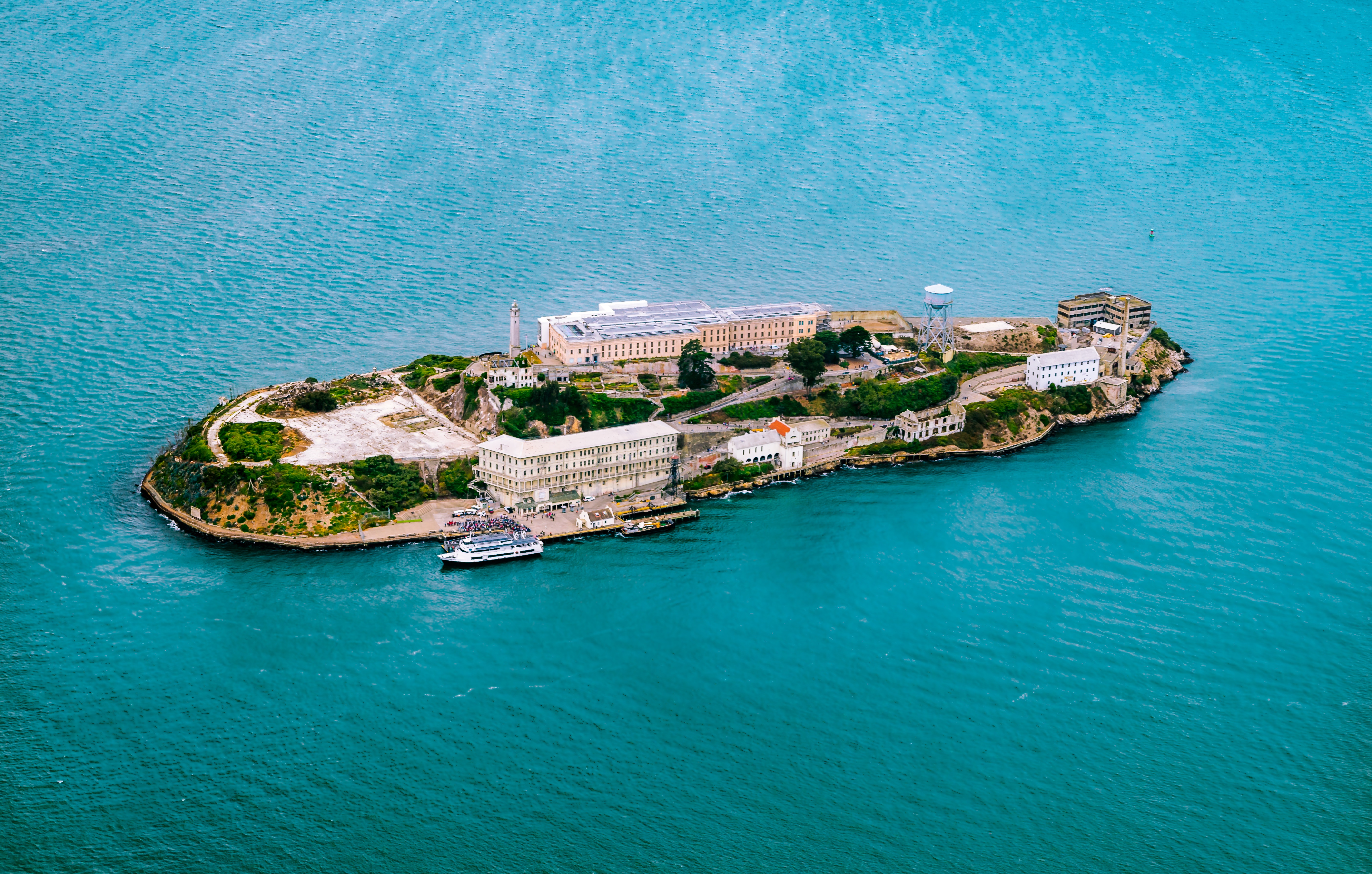 A visit to the legendary prison island Alcatraz, the scene of exciting Hollywood films and today a museum, is definitely worthwhile. The crossing by boat takes about 20 minutes and is a highlight in itself because of the great view to the skyline and the Golden Gate Bridge. On the island you can move around freely and take an audio tour through the cells where gangsters like Al Capone or Machine Gun Kelly were imprisoned. Make sure to reserve in advance! If you don’t order the tickets at least one week ahead, you won’t have a chance to be taken by boat to the island – unless you queue up for tickets in the middle of the night. But it´s for sure one of the best things to do in San Francisco. 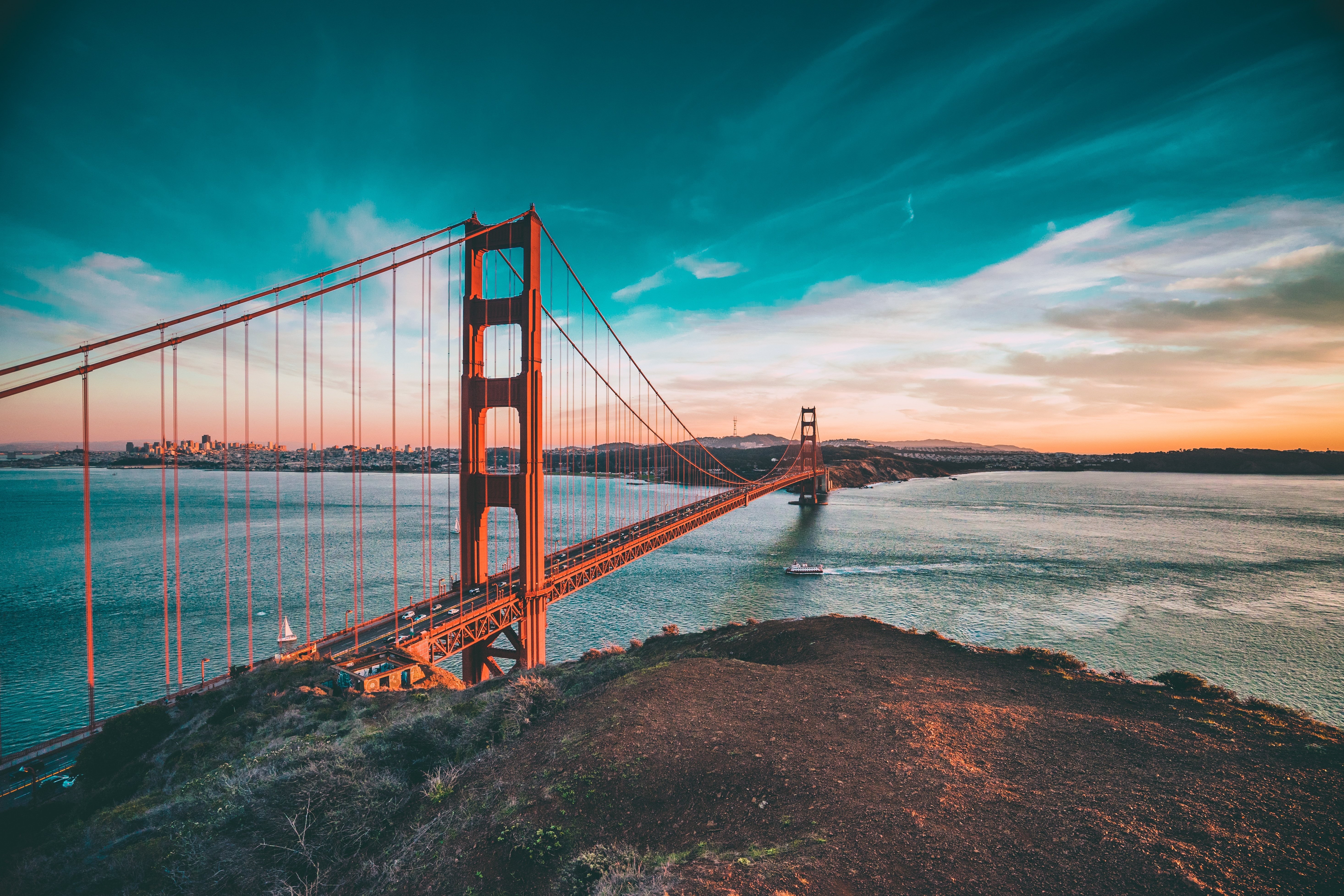 The Golden Gate Bridge is almost like the Berlin TV Tower: you can see it from almost every point in the city, and there are seemingly endless good spots for taking photos.

In the following places the bridge shows its best side: 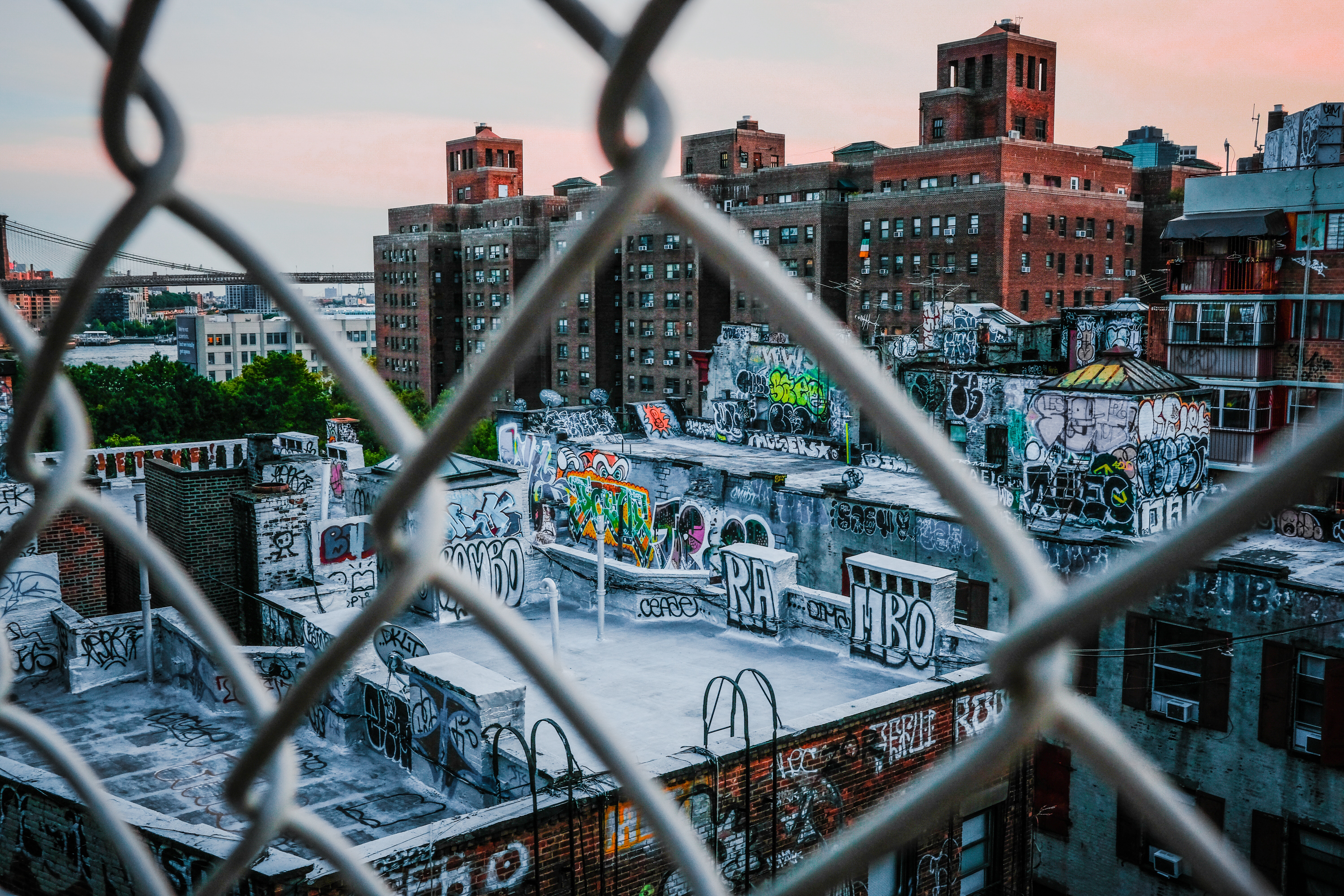 One of the coolest neighborhoods in San Francisco is the Mission District in the western part of downtown, named after the Mission Dolores, the oldest surviving building in San Francisco. The Latino neighborhood is known for its street art, graffiti and murals, most of which can be found in Balmy Street, Clarion Alley and 18th Street. Here stands the famous Woman’s Building, a house painted from top to bottom. It shows famous women of different skin colours who have worked for world peace. The Mission District also boasts many cafes and the city’s supposedly best Mexican restaurants. 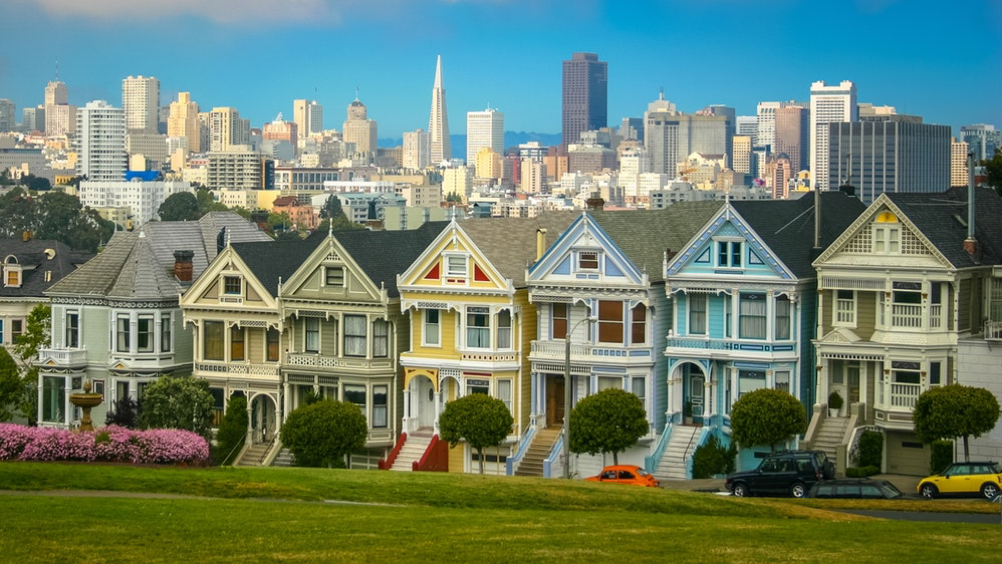 The Victorian wooden houses shaped the architectural style of the city for more than six decades. The relatively narrow wooden houses are characterised by their turrets, arches, squiggles and, above all, their splendour of colour. Hence the name Painted Ladies. Although many wooden houses did not survive the great fire of 1906 and other events, they still characterise some districts today. Alamo Square is also home to the most frequently photographed Painted Ladies. 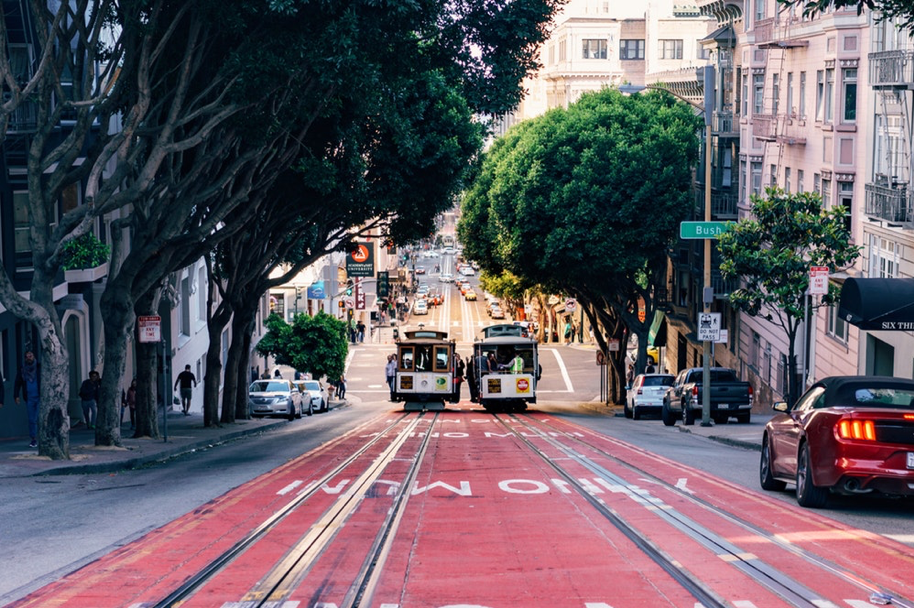 Since 1873, the historic tram has been clattering through the city centre at 15 kilometres per hour. Of course, you can also board the tram yourself and let yourself be driven up and down the hills. But quite honestly: the 5 dollars (4,50 Euro) per route as well as a waiting time of up to 30 minutes in order to get a place in the line 60 that is most popular with tourists are not really worth the effort. In any case, the historic wagons are the most beautiful to look at from the outside and make a great photo. The Cable Cars, which have been a national monument of the USA since 1964, even have their own museum. 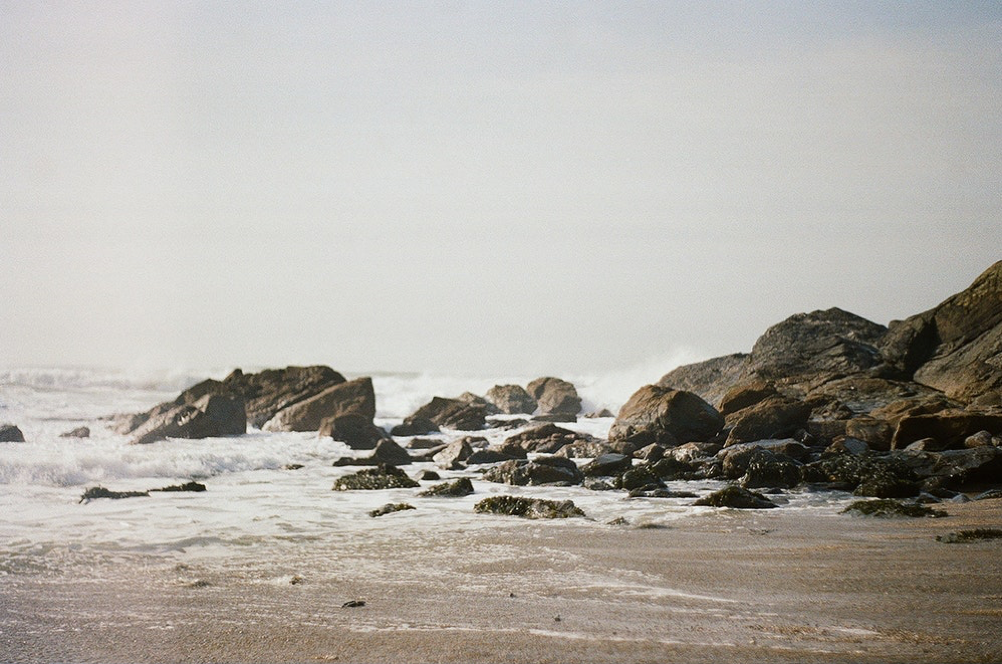 Everyone goes to Alcatraz – but another island in the bay of San Francisco is definitely worth a visit: Angel Island. From there you also have a fantastic view of the skyline of the city, and the Golden Gate Bridge can be photographed with Alcatraz in front of it. From San Francisco there are daily ferries to Angel Island and on the island itself there is the possibility to rent bicycles. After reaching the highest point, the 240 meters high Mount Livermore, the view is even more magnificent. 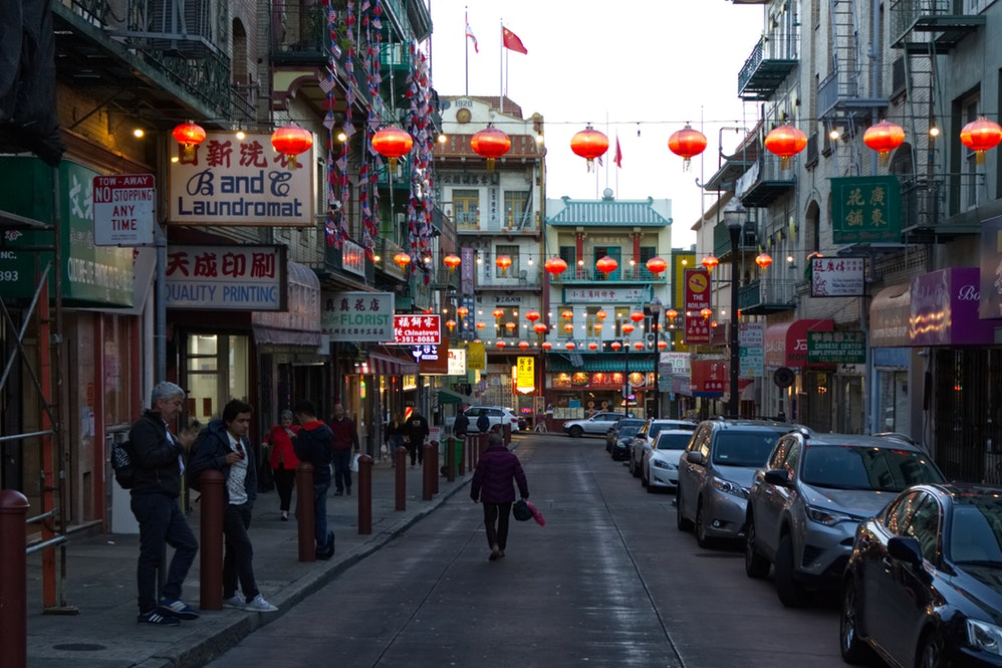 Culinary highlights of a completely different kind can be found in Chinatown, one of the largest of its kind in the USA. Almost only Cantonese and Mandarin are spoken and cooked here. About 80,000 people live in the quarter, which is characterized by Chinese architecture and decoration. The district was established as early as 1850, and you can actually experience a bit of real China here. This is definitely one of the best things to do in San Francisco! 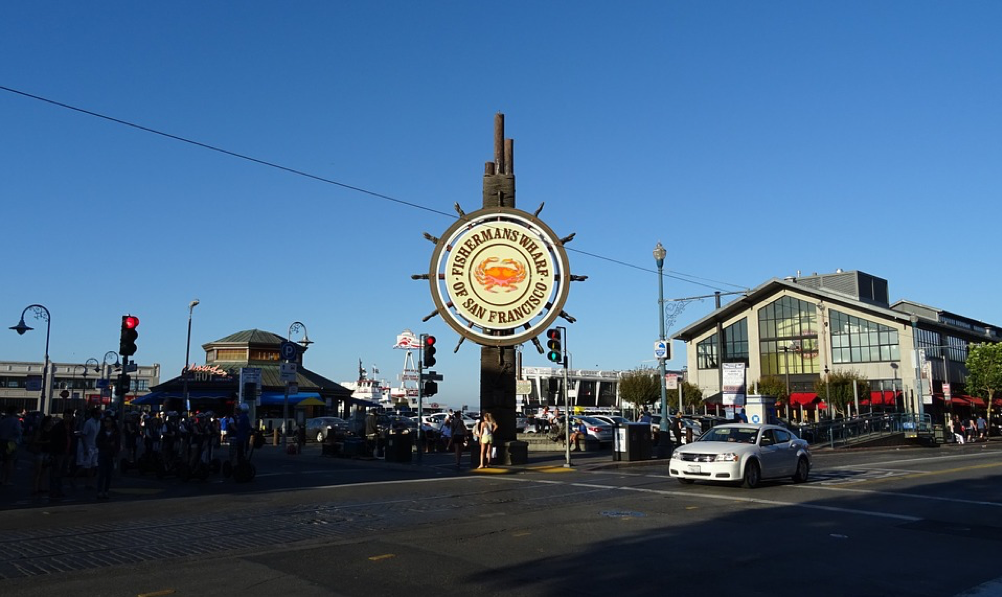 In the northeast of San Francisco you will find the district Fisherman’s Wharf, where many tourist attractions are offered. Therefore, Fisherman’s Wharf is a good starting point to experience and discover San Francisco. The fact that Fisherman’s Wharf used to be a pier for fishing boats and a place for fish handling can still be seen today in the countless restaurants with delicious fish dishes and in the construction of the houses, especially at pier 39. 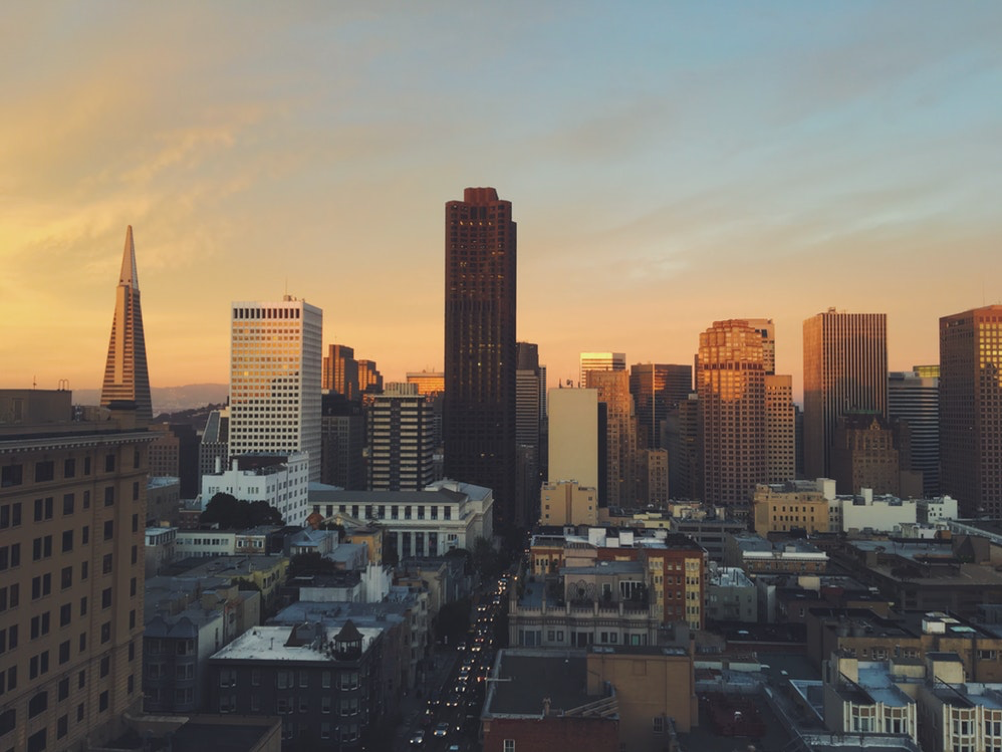 Downtown San Francisco basically consists of the Civic Center, Financial District and Tenderloin neighborhoods. It is very lively and every corner has its own metropolitan charm – each with its own different people and life stories. Architectural highlights include the Ferry Building, City Hall and Transamerica Pyramid. 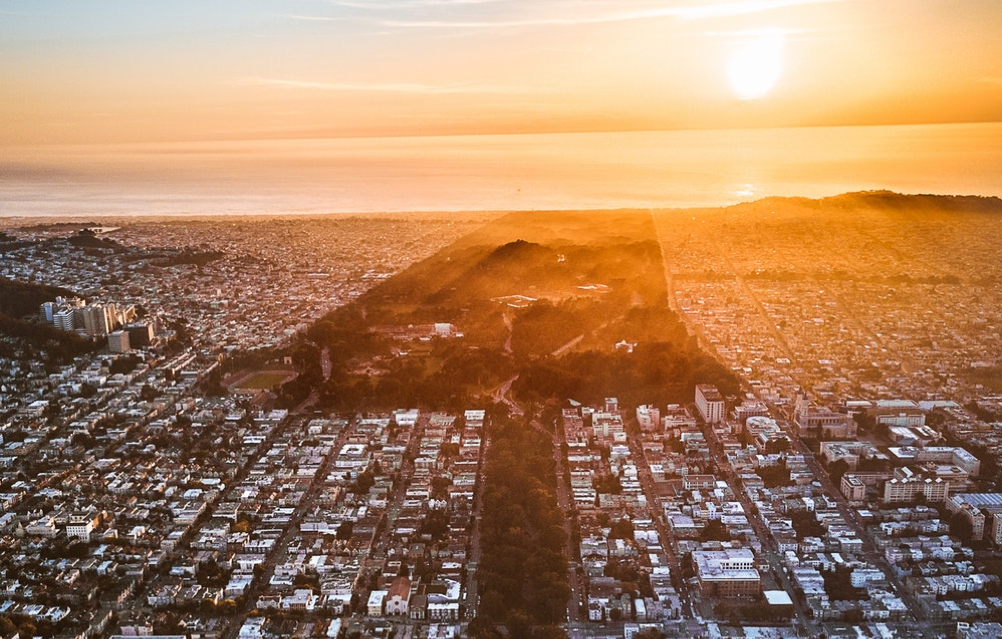 The Golden Gate Park is located in the northwest of the city and stretches over a length of 5km. Many attractions and scenic attractions make the Golden Gate Park one of the most popular parks in the USA – for example to relax from stress or to do sports. Among the most important attractions are the various museums and botanical gardens.
What to expect from your trip to San Francisco
Rest assured that even if you only check half of our recommendations, you will get a lot of great things to see. The city life can be explored best when going around and interacting with locals, so be curious and open-minded and you will get the same back! There are for sure even more things to explore but with these best things to do in San Francisco you can already plan your trip well.