The 9 Best Things to Do in New York

New York is one of the biggest cities in the world which is why there are endless cultural and popular attractions to see. But is there a way to optimise your time to make the most out of your stay?
Especially when it comes to travel, planning is key. Know what places you should see and make a list of priorities. This way you will make sure to have seen all the most important landmarks before you leave again. Among the best things to do in New York City you will find a huge variety of activities, from visiting the most famous skyscraper in the world to being in the heart of Manhattan.
To help you organize your trip and see all the beautiful things this city has to offer we have written a guideline with the top 10 things to visit. So take some notes and be ready to plan your next trip to the big apple with a little bit of help! 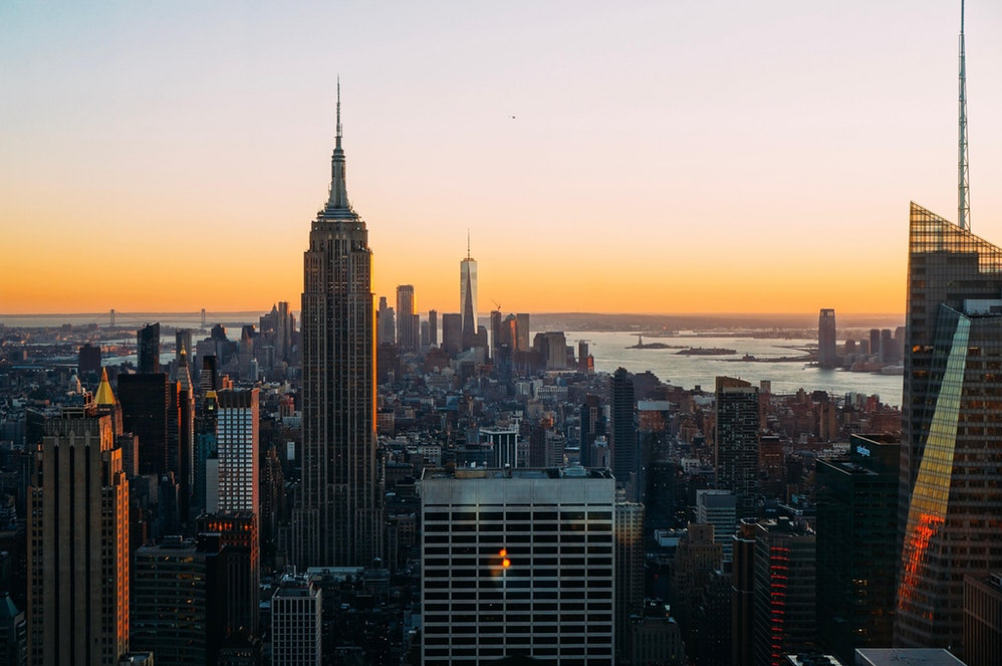 The Empire State Building is synonymous with freedom, independence and the endless possibilities that the US and the city of New York have to offer. Since its completion in 1931 with a height of 443 meters, this is undoubtedly one of the tallest buildings in the world and attracts around 3 million tourists every year. The majestic building has been the focus of film and television countless times. At a height of 373 meters there is a breath-taking observation deck, which offers visitors a magnificent panorama over the metropolis of New York. The Empire State Building is a must-see for tourists. Every year, thousands of sports enthusiasts climb 1,576 steps to reach the 86th floor of the building for the so-called Empire State Building Run-Up.

2. Brooklyn Bridge: The most famous bridge of NYC 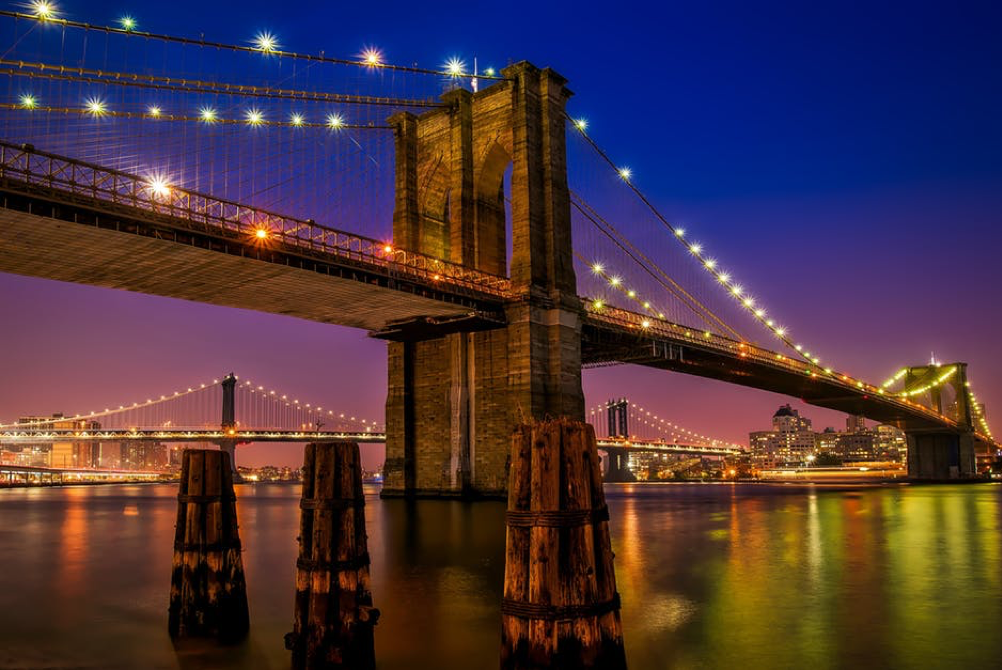 One of the oldest suspension bridges in the USA is located in the south. The Brooklyn Bridge is one of New York’s landmarks, connecting Brooklyn with the heart of Manhattan. Whether by foot, bike or car, make sure you check out the Brooklyn Bridge and don’t worry about a huge amount of locals – they are often annoyed by the many tourists who block the paths because they are constantly shooting photos. When you make your visit, it’s best to start from Brooklyn and walk across the bridge towards Manhattan. For this, you first take the subway lines 2 or 3 in the direction of Brooklyn and get off at “Clark Street” stop. Walk down the street to the right and from there you can reach the stairway to the bridge. Especially recommended is a walk at sunset when the light is reflecting in the glass facades of the skyscrapers in the Financial District. 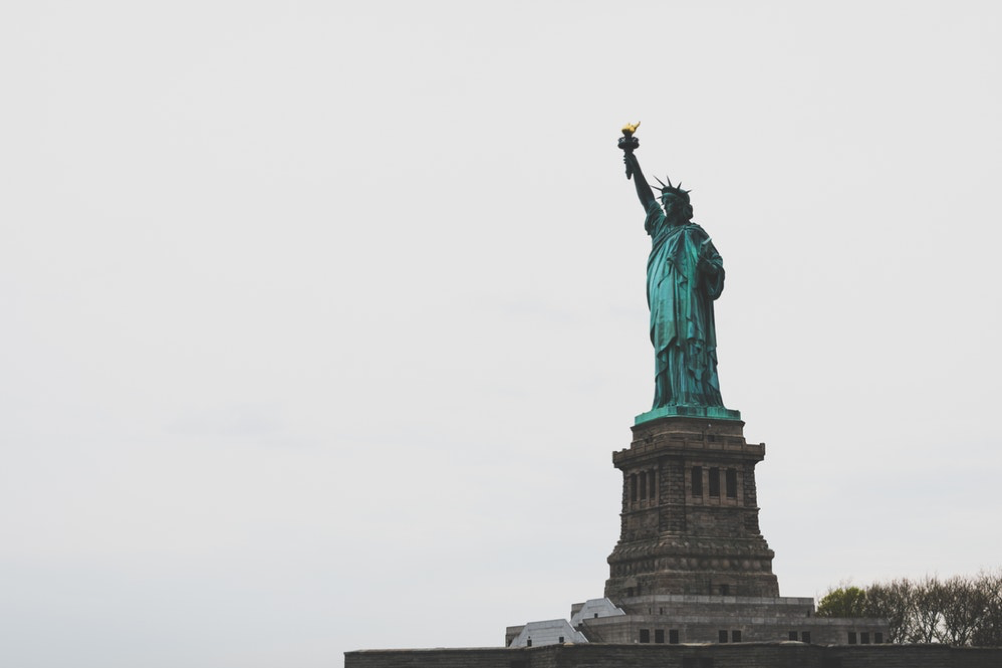 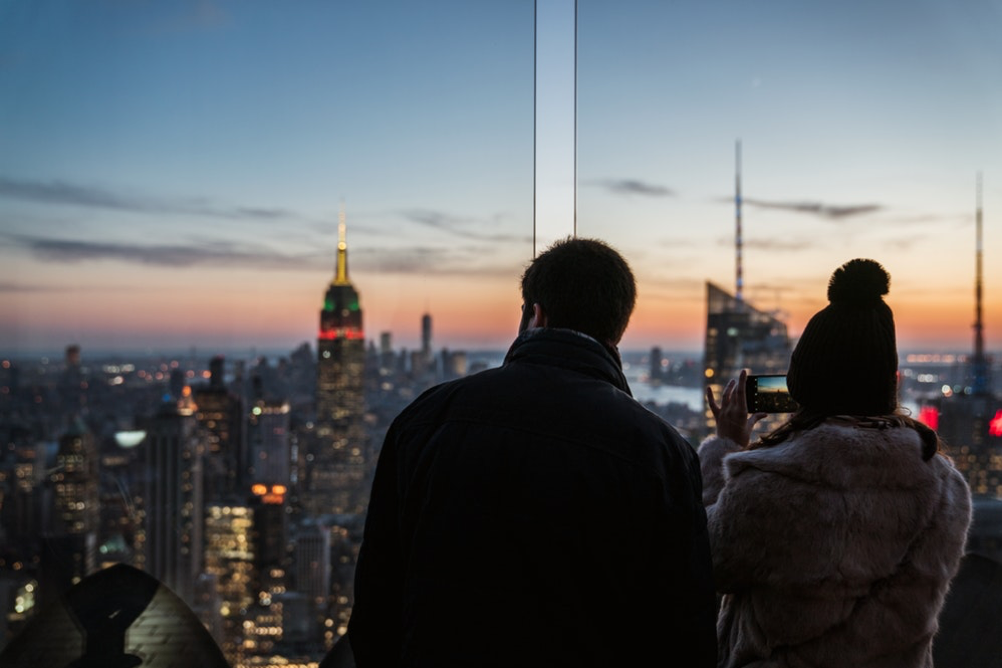 Every NYC tourist always asks themselves from which skyscrapers they would rather look at the street canyons: from the world-famous Empire State Building or Rockefeller Center. Of course, that is a matter of taste. However, if you want to have the imposing Empire State Building on your photos, it is advisable to enjoy the view from the Rockefeller Center. Tickets for the Top of The Rock are available on-site or online on the Rockefeller Center website. Try to schedule your visit for the afternoon, many visitors in fact choose to visit the Top of The Rock before sunset. 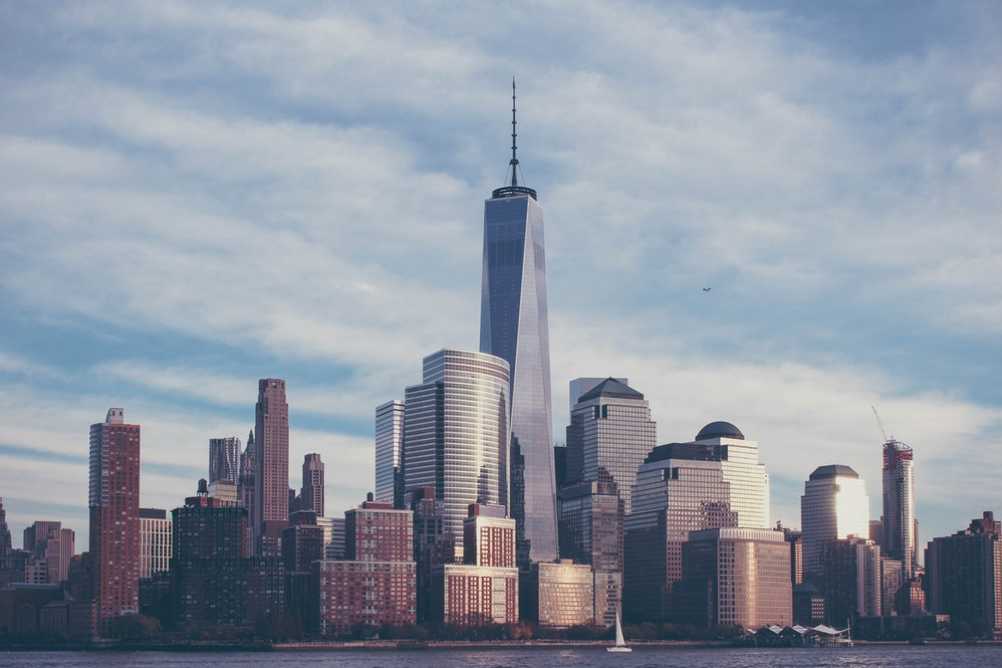 After the old World Trade Center was destroyed in the 2001 attacks, the One World Trade Center was completed in 2014. The asymmetrical skyscraper is now the tallest building in the city at an incredible 541 meters, making it a New York landmark. The building is located directly on Ground Zero, where you will also find the 9/11 Memorial and the 9/11 Memorial Museum, reminiscent of the attacks. The theme is extremely sad, but this place is definitely worth visiting and one of the best things to do in New York City!

6. Times Square: the heart of Manhattan 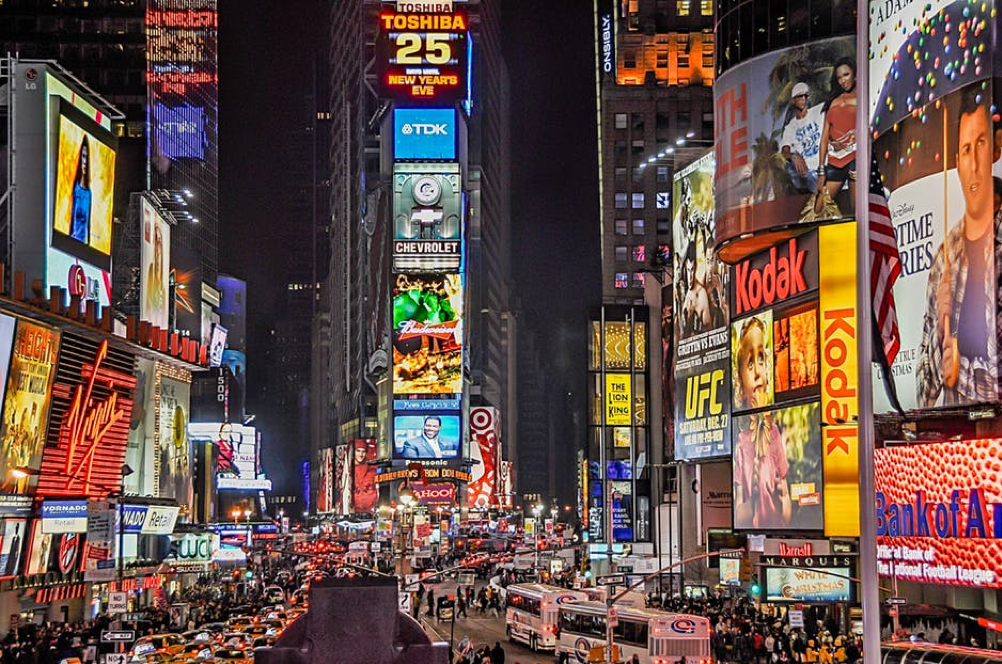 1662/5000 Times Square is the intersection of Broadway and 7th Avenue, extending from 42nd to 47th streets in Midtown Manhattan. The square was once named after the building of the famous daily newspaper “The Times”, which used to have its publishing house in this square. Nowadays, the Times Building is still there and a popular theme in films and photographs with its huge clock. While Times Square and the adjacent Theater District were a haunt for drug dealers and prostitutes previously, it is now the most popular tourist destination in midtown Manhattan.
Since 2009, Times Square has been closed to traffic and is now largely converted to the pedestrian area. A major event on Times Square is the legendary annual New Year’s Eve party. If you want to get tickets, make sure to book a few months in advance as the demand is really high. With so many tourists visiting Times Square everyday, the ad prices on the various billboards may go up to 175,000$ a month and the space is monitored by countless cameras around the clock. A few of these surveillance cameras are available as a webcam. Among New York tourists, it has become a real trend to make appointments at a certain time and then send live greetings to those who watch the webcam at home.

7. Wall Street & Charging Bull: The financial center of the USA

Wall Street is a famous street in Manhattan, known as the central of the largest stock exchange in the world and numerous banks. It is located in the New York Financial District. Some people refer to the entire US financial industry when they talk about Wall Street which shows its global importance. Important things to see around here are the famous Federal Hall, which passed the Bill of Rights, and the well-known Bull in Bowling Green Park which is a symbol of stock market optimism. 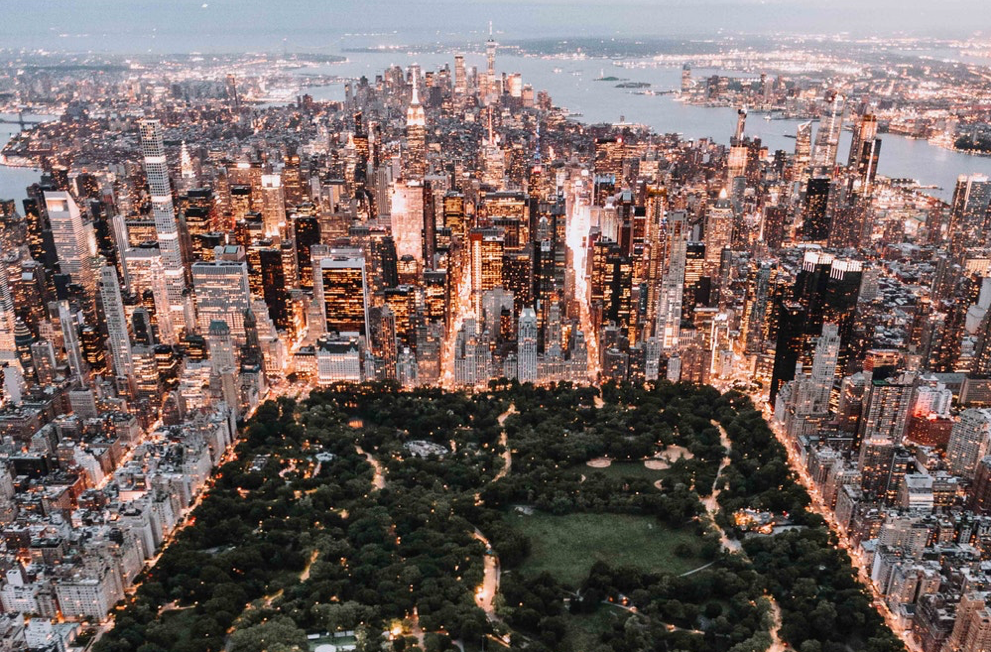 When thinking about the best things to do in New York City we surely have to add “The green lung of New York”, Central Park. This huge city park is located in the heart of Manhattan. The area of Central Park covers a length of 4.02 km and 800 m width. This gives a total of 3.4 km² of beautiful, green scenery in the middle of New York City.
Before the Central Park was created, the so-called Jones Wood was there. This was a less beautiful, unkempt and swampy forest, which was inhabited by about 1,500 immigrants. In 1851, the city of New York was allowed to buy the area and, in 1873, Central Park was created as a recreational area for the New Yorker population.
Central Park attracts residents and tourists throughout the year with its free concerts and sporting events. In winter, the Wollman Rink, a large ice rink, invites you to skate and drink mulled wine. 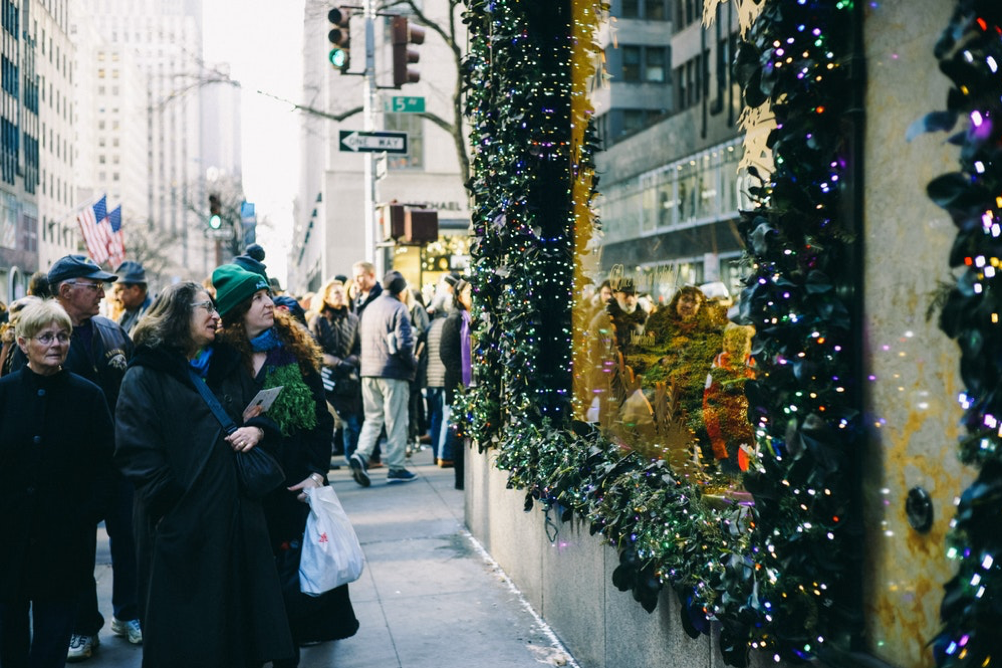 If you’re a shopping fan, you’ll love Fifth Avenue in New York even though it is the most expensive shopping street in the world. Thus, better leave your credit cards at home if you travel on budget!
Fifth Avenue is 10 kilometers long. In addition to the posh shops and boutiques, which are mainly located between the 49th and 59th Street, the Avenue has some other things to offer. On the border to Central Park many super-rich residents decided to buy their houses that you might want to check out. Between 82nd and 104th Street, there are 9 museums, which earned this section the nickname “Museum Mile”.
No matter which part you are passionate about, just hop on one of the many tour buses through New York and enjoy the ride on one of the most famous streets.

What to expect from your trip to New York?

These were our top tips for the best things to do in New York City. However, when visiting such a beautiful city, make sure you always keep your eyes wide open and wander around because you never know what you are going to find around the next corner!